As the ANTICORRP project is entering its last year, our researchers are not getting restless. On the contrary: as the results of our research are more and more crystallising, we are organised events across Europe to present our research to the public and explain our view on the fight against corruption. Three of these events took place in May. We already reported on the policy conference we organised in Gothenburg on 18 May. However, in this same week, ANTICORRP events also took place in Berlin and Bratislava.

On 19 May the German Institute of Global and Area Studies (GIGA) organised a panel discussion on How to Foster Good Governance and Anti-Corruption in European Development Aid. The event presented research result of ANTICORRP Work Package 8, which analysed the impact of EU conditionality and EU aid on good governance in new EU member states, the European Neighbourhood and beyond. 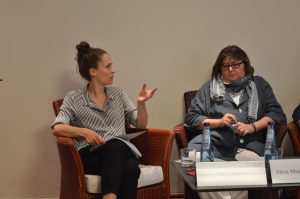 The event was opened by Bert Hoffmann (Head of GIGA Berlin office) and introduced and chaired by Dr. Christian von Soest. He set the tone of the evening by highlighting the underlying questions of the events and stressing that Western aid and tax avoidance, as highlighted in the Panama Papers, are really two sides of the same coin when it gets to the question of good governance.

Dr. Jana Warkotsch introduced the results of the ANTICORRP studies on EU aid and EU conditionality. Overall the instruments used by the EU showed some success across all countries, however, their application was not consistent enough. In many cases the EU’s commitments to good governance were not translated into action and local contexts and the capacity of existing institutions were often ignored. Dr Warkotsch summarised the recommendations of the eight policy reports by stressing the need for locally led development, more political dialogue, better incentives and support for civil society. She highlighted that overall the EU in too many cases lacks an understanding of the local political and economic context when trying to promote good governance.

This criticism was echoed by Prof Alina Mungiu-Pippidi, leader of the ANTICORRP policy pillar. She put EU good governance support into the wider framework of the past 30 years of anti-corruption policymaking. She stressed that only very few countries experienced a successful transition from a governance system based in particularism to one centred around ethical universalism. Prof Mungiu-Pippidi also highlighted the need for better corruption measurements and more localised solutions as policies only work in a proper context. In doing so she stressed the efforts that were put into the Index of Public Integrity, one of the latest outcomes of the ANTICORRP project. 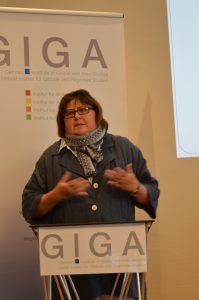 Dr Warkotsch and Prof Mungiu-Pippidi were joined in the discussion by Craig Fagan, Head of Global Policy at Transparency International. He similarly called for more attention to the local context and also for transparency in the distribution of aid. He demanded a holistic and comprehensive approach to the fight against corruption that also looks at how aid supports rather than fights corruption. In the following debate, the three panellists engaged with the audience and answered questions about political will in recipient states, the specificities of EU aid and the increasingly limited space for civil society in many countries.

In the same week, on 20 May 2016, the School of Communication and Media, jointly with the Slovak Section of Association of European Journalists, organised a seminar in Bratislava at which they presented results of its research on media coverage of corruption and on corrupt practices in the media itself. The seminar was based around a presentation and discussion of results of computer assisted content analysis of corruption coverage by four leading Slovak newspapers between 2004 to 2013, as well as a presentation and discussion on selected in-depth case studies tackling various roles and interactions of media and journalists covering corruption or facing corruption themselves.

The presentation sparked a discussion that revealed some interesting points related to coverage of corruption by local media. During the discussion, a representative of the Slovak Section of Association of European Journalists sharply criticised all political parties and politicians which are often caught up in corruption scandals. A representatives of the Supreme Audit Authority also suggested that the media are not sufficiently interested in real cases of corruption and do not understand the work of the Supreme Audit Authority. Cases were often not followed up until the end and reporting was limited by short contracts of many journalists, relatively low salaries, and, in many cases tabloid-style reporting. 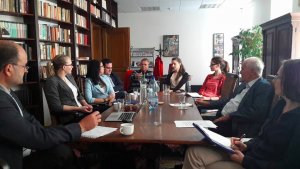 Seminar participants argued that the media is probably the only power Slovakia that white collar criminals are still afraid of, but that often the media does not fulfil these expectations.  TV JOJ, for instance, often shies away from conflicts with politicians and also other TV stations are happy to cooperate with any government.

Interestingly, a representative of the Supreme Audit Authority suggested that a lot of investigative journalism in Slovakia is motivated by generally low trust in public authorities.  Participants also suggested that EU Funds were often used in a public relations type of manner, in order to silence critical voices in the media.

Especially the Slovakian Supreme Audit Authority called for further cooperation and help in disseminating research findings, also in order to feed into legal reforms and political action. Motivated by the stimulating discussion, some participants called for a follow-up roundtable to see where the ANTICORRP research results could be applied further.

The events in Berlin and Bratislava highlighted again the breadth of the ANTICORRP project. They showed that its research is dealing with pressing issues in relation to good governance and keeps both the international and local dimension of the fight against corruption in mind.